Setup:
Separate the four through nine cards from the deck and shuffle it. This is called the Tadpole Deck. Set it aside for now.
Then, split the other deck into red and black halves and shuffle them. These decks are called the Bongle Decks. Place the Bongle Decks somewhere to the side and flip up the top card from each. The higher card of the two determines the trump suit for the round!
Then, deal the entire Tadpole Deck out to each player. The person to the left of the dealer plays first, and the dealer rotates to the left each round!

Rules:
Tadpoleis a trick-taking sort of game. One player leads a trick, and the other players must follow suit if they can in clockwise order. If you cannot follow suit, you can play a trump card, renounce, or blindly play the top card from one of the two Bongle Decks.
The first trick is played with three cards. The winner of the trick leads the next trick. For every trick after the first of a round, the leader of each trick will also play an extra card at the end of the trick. This will mean that players will start to have different sized hands as it gets going! The round ends when two of the three players are out of cards. You receive one point for every trick you win.
When a round ends, a new Tadpole Deck is created from all the tricks from the last round, plus the cards used to determine the trump suit and the Extra Pile (see below). Before the Tadpole deck is dealt out again, determine the trump suit like in the setup stage.
The Tadpole Deck is then dealt out so that each player has 8 cards. Put the leftover cards into a new deck called the Extra Pile and place that next to the Bongle Decks. Don’t touch the Extra Pile until you shuffle everything together for the next round! Other than that, the Extra Pile is never used.
If both Bongle Decks run out, but players do not have enough cards to finish the round, the cards in play are discarded and the game ends. The player with the most points at the end of the game wins!
​
Extras: 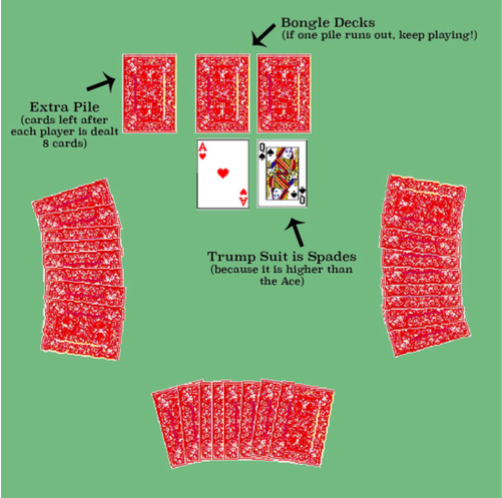